What is the best place to find computer vision datasets? Check out this list of 20+ curated image and video datasets and start annotating data and training your models today. 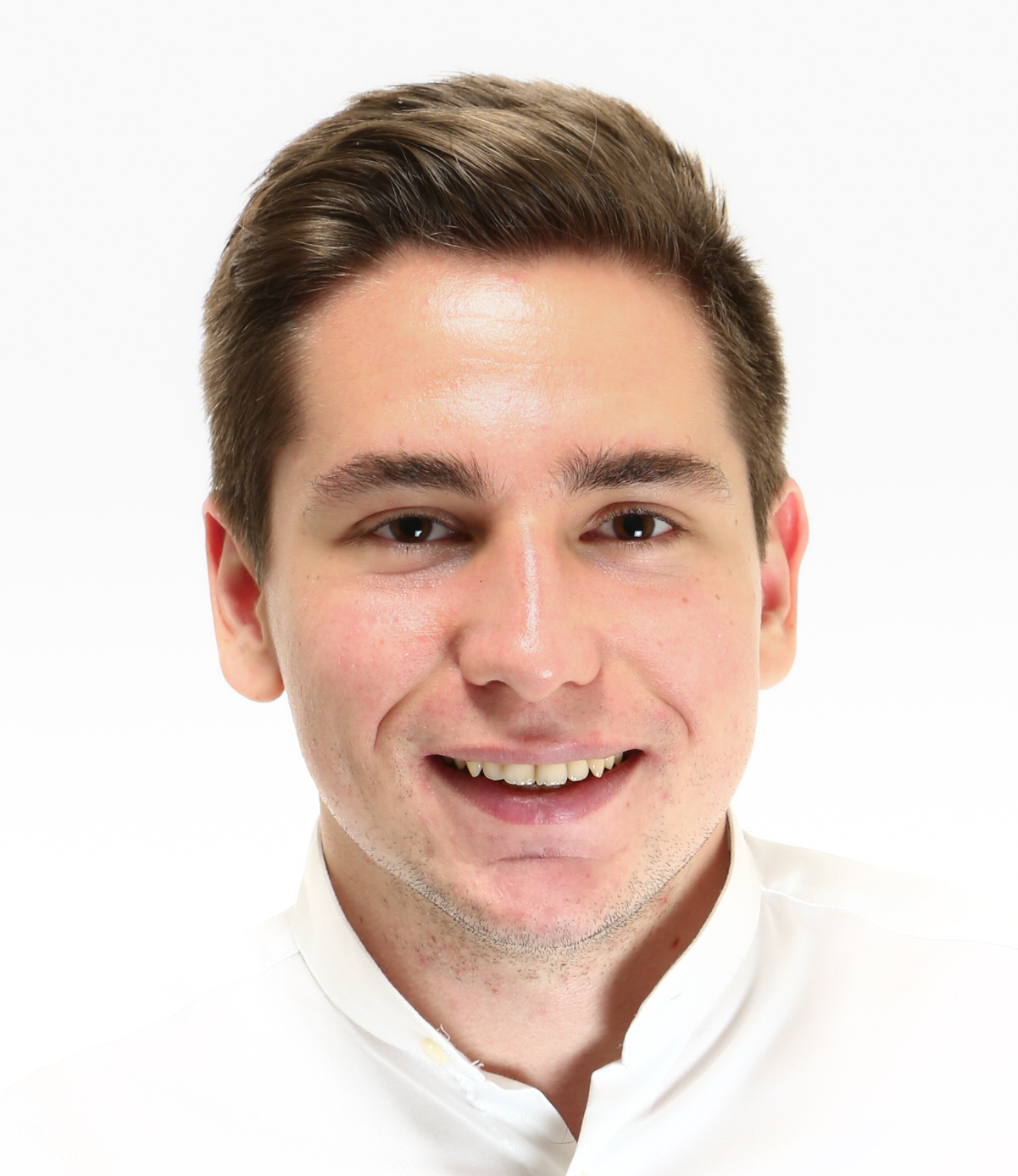 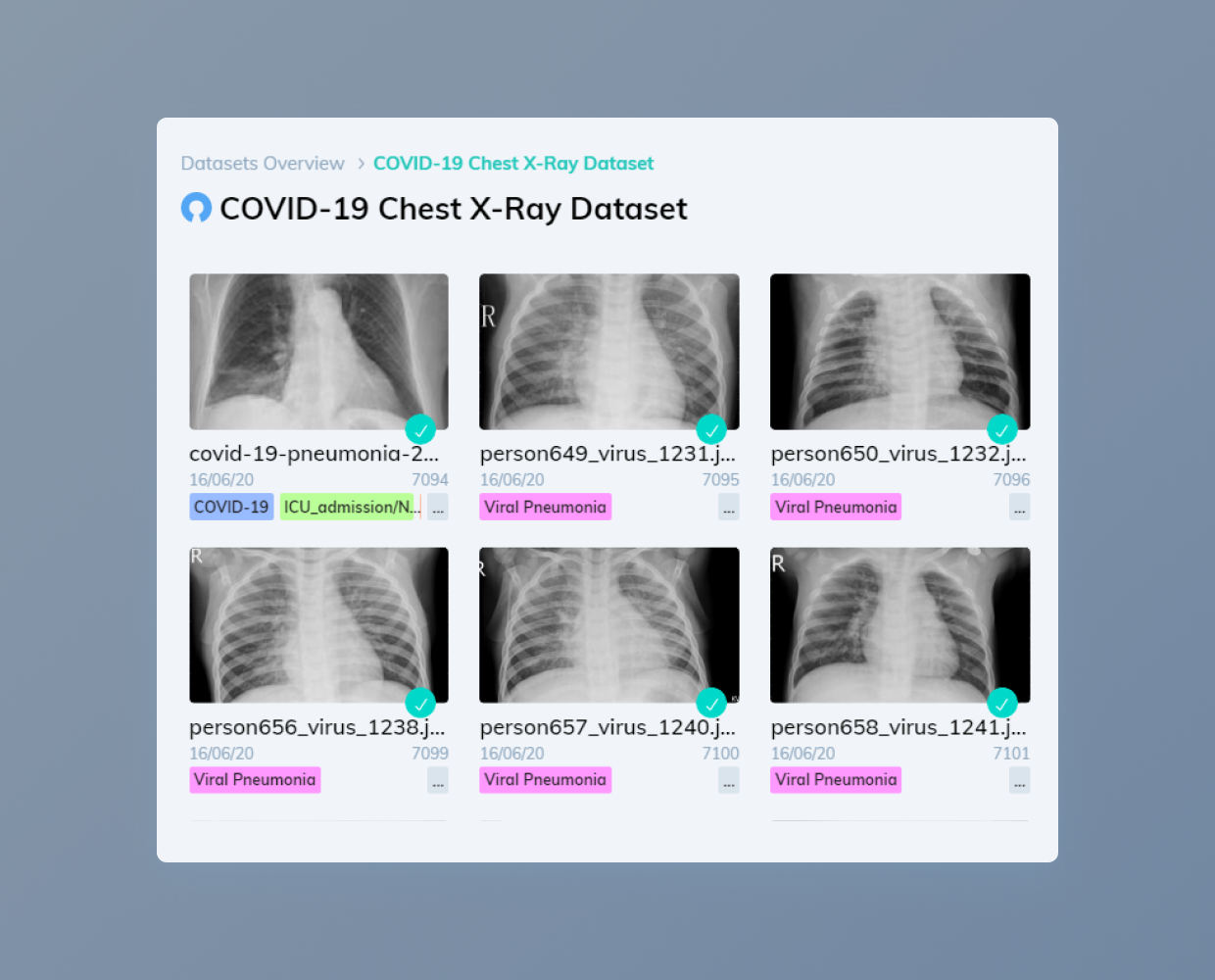 AI is driven by data—not code.

This bold statement could have sounded outlandish a few years back, but not anymore. However—

There is still one problem.

Quality training data can be really hard to access. It might take you days or weeks to find a suitable dataset for your computer vision tasks.

In this article, we've put together a comprehensive list of quality computer vision datasets that you can access for free.

💡 Pro tip: Check out our Guide to Computer Vision for a recap on the computer vision basics.

It is V7’s original dataset containing 6500 images of AP/PA chest X-Rays with pixel-level polygonal lung segmentations. There are 517 cases of COVID-19 amongst these.

Lung annotations are polygons following pixel-level boundaries. You can export them in COCO, VOC, or Darwin JSON formats. Each annotation file contains a URL to the original full resolution image and a reduced size thumbnail.

The CIFAR-10 and CIFAR-100 are labeled subsets of the 80 million tiny images dataset collected by Alex Krizhevsky, Vinod Nair, and Geoffrey Hinton.

CIFAR-10 contains 60000 32x32 color images with 10 classes (animals and real-life objects). There are 6000 images per class. This dataset has 50000 training images and 10000 test images. The classes are mutually exclusive, without any overlaps.

CIFAR-100 consists of 100 classes containing 600 images each. There are 500 training images and 100 testing images per class.

ImageNet is one of the most popular image databases with more than 14 million hand-annotated images.

This database is organized according to the WordNet hierarchy (currently only the nouns), in which hundreds and thousands of images depict each node of the hierarchy. Object-level annotations provide a bounding box around the (visible part of the) indicated object.

It is a large video dataset consisting of 650,000 clips covering 700 human action classes.

It was released in 1999 and is used for classification tasks.

LSUN (The Large-scale Scene Understanding) contains close to one million labeled images for each of 10 scene categories and 20 object categories.

💡 Pro tip: Check out The Train, Validation, and Test Sets: How to Split Your Machine Learning Data to learn more.

It is one of the largest publicly available datasets of human faces with gender, age, and name.

Labeled Faces in the Wild

It is a large-scale database of 13.000 face photographs designed for facial recognition tasks. Each face has been labeled with the person’s name.

Cityscapes is a database containing a diverse set of stereo video sequences recorded in street scenes from 50 different cities. The images were captured over time in various light conditions and weather.

This dataset can be used for object recognition.

Places dataset consists of 2.5 million images (with a category label) and 205 scene categories. There are more than 5,000 images per category. It’s trained using CNNs and can be used for scene recognition tasks.

Another dataset contributed by MIT. There are 1.8 million images from 365 scene categories. The dataset contains 50 images per category in the validation set and 900 in the testing set. Places2 Database can be used for scene recognition and generic deep scene features for visual recognition.

It is a large dataset and knowledge base with 108,077 images with annotated objects, attributes, and their relationships.

This dataset has been built using images and annotations (class labels, bounding boxes) from ImageNet. It is a large-scale dataset containing images of 120 breeds of dogs from around the world. There are 20.580 images and 120 categories.

You have to download the images and their class labels and bounding boxes separately.

The CAT dataset includes over 9,000 cat images with annotated facial features. There are annotations of the cat’s head with nine points for each image: two for eyes, one for the mouth, and six for the ears.

CelebFaces Attributes Dataset (CelebA) is a large-scale face attributes dataset with more than 200.000 celebrity images, each with 40 attribute annotations. The annotations include 10,177 unique identities and five landmark locations per image.

The dataset can be used as training and test sets for face detection, face attribute recognition, localization, and landmark (or facial part) localization.

This dataset contains 853 images belonging to the 3 classes and their bounding boxes in the PASCAL VOC format. The classes include “with mask”, “without mask” and “Mask worn incorrectly”.

It is a dataset with more than 7000 unique images in HD resolution.

It consists of early fire and smoke images captured using mobile phones in real-world scenarios. The images were captured under a wide variety of lighting conditions and weather. This dataset can be used for fire and smoke recognition, detection, plus anomaly detection.

This dataset consists of high-resolution UAS imageries with detailed semantic annotation regarding the damages caused by hurricanes.

The data is collected with a small UAS platform, DJI Mavic Pro quadcopters, after Hurricane Harvey. The whole dataset has 2343 images, divided into training (~60%), validation (~20%), and test (~20%) sets.

Over to you: Next steps

Curious to learn more about labeling and training data?

Here’s a couple of resources to get you started:

And if you are ready to take action, check out: 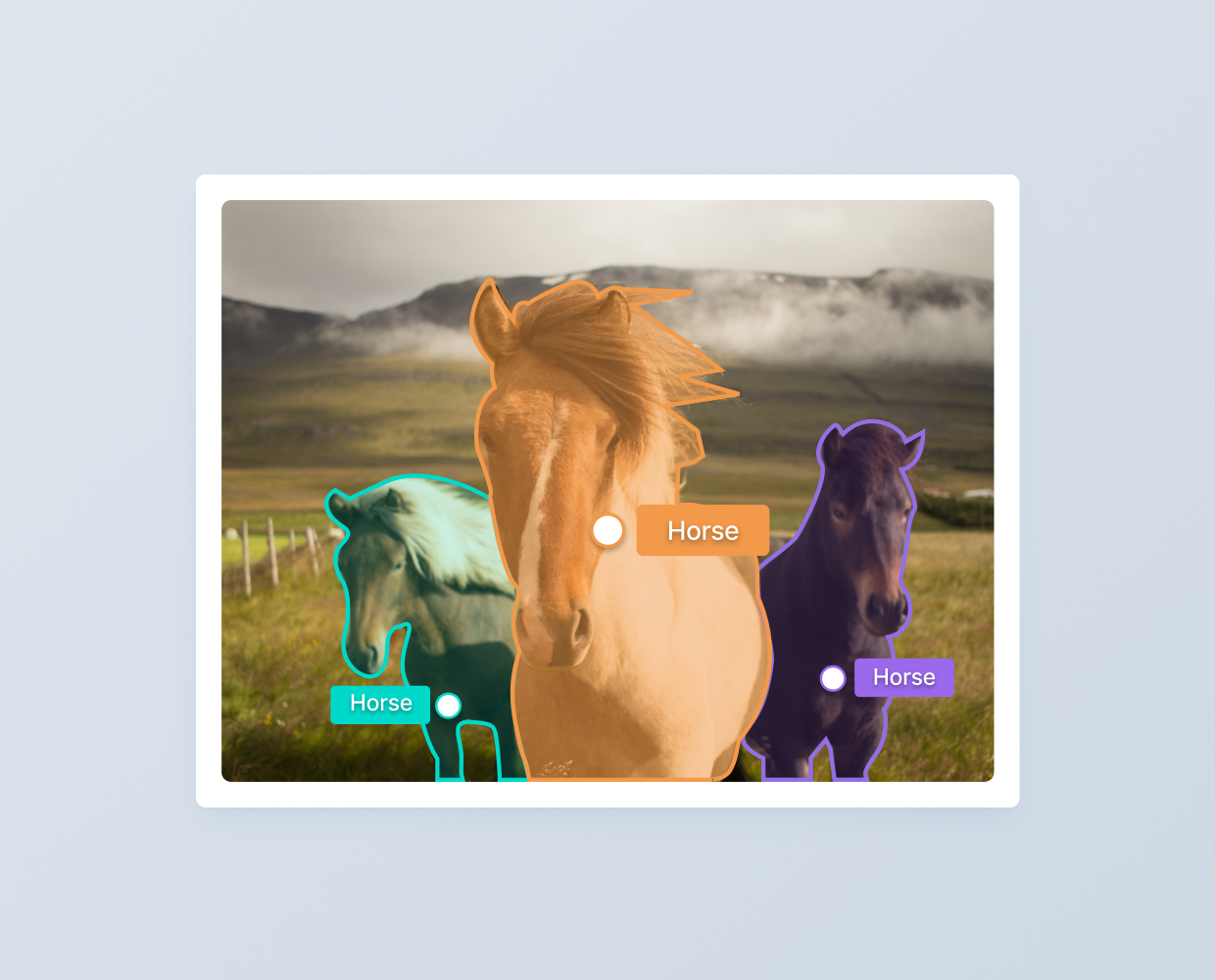 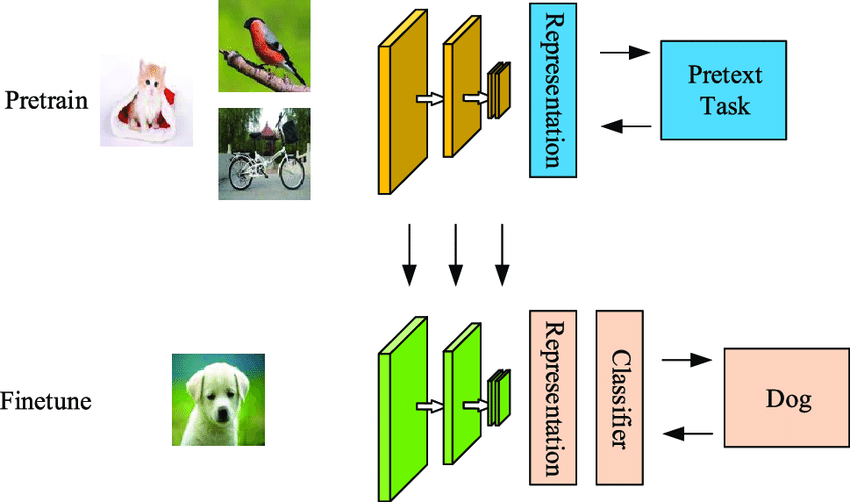 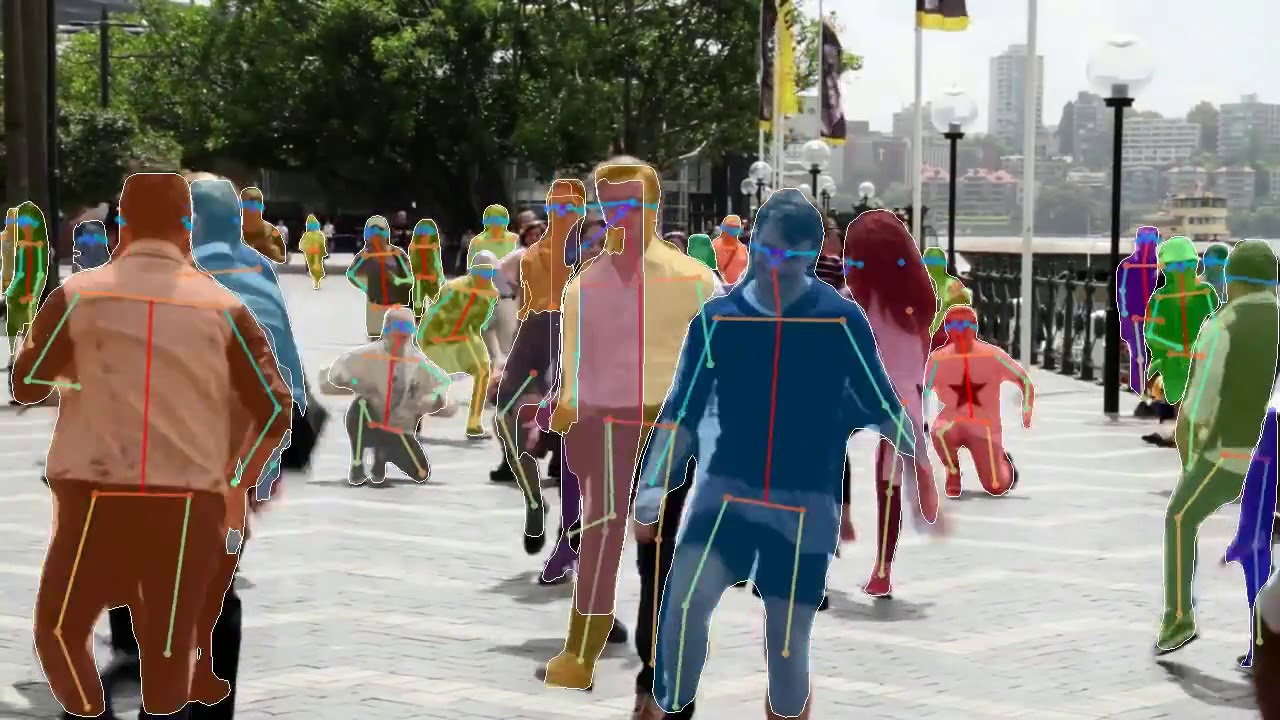