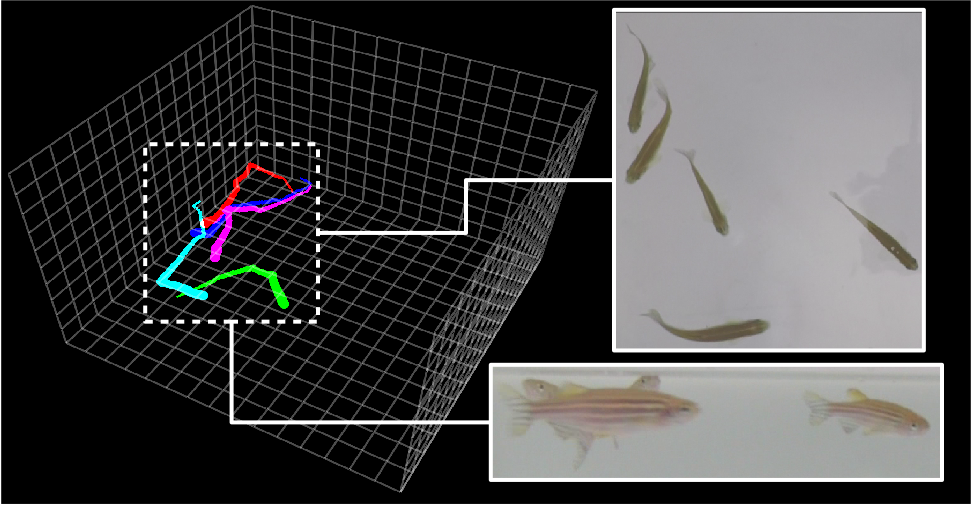 3D-ZeF is the first RGB 3D multiple object tracking dataset of its kind. Zebrafish is a widely used model organism for studying neurological disorders, social anxiety, and more. Behavioral analysis can be a critical part of such research and it has traditionally been conducted manually, which is an expensive, time consuming, and subjective task.With the publication of 3D-ZeF, we hope that we can spark the interest in the field such that solutions to this extremely difficult multiple object tracking problem can be developed.The dataset consists of a training, validation, and test split. Each split consists of multiple sequences and each sequence consists of two recordings. It should be noted that unique fish are used in each split. Furthermore, the fish in the training and validation split are from one cohort of fish and the zebrafish in the test split are from a completely different and younger cohort. This is to avoid data leakage and overfitting.Each sequence consists of two recordings, one from each of the two GoPros. The details of the dataset are presented in the table below where the name of each dataset denotes what split it belongs to and the amount of fish present. E.g., Trn2 belongs to the train split and it has two fish present.All the fish have been manually bounding and point annotated in all frames. The point annotations are placed on the head of the fish in order to have a stable point for the stereo 3D reconstruction phase. In cases where a fish head is occluded we have estimated the head point annotations as best as possible and only the visible part of the fish has been bounding box annotated. In cases where the fish is totally occluded the bounding box will only be an estimated point.